Sometimes in the exam you are given data that concerns a future time period. In this case, the future data is a prediction or forecast, and you must make this clear when writing your report. You cannot state it in the present tense as a fact. You must make it clear to the examiner that this information is only a forecast. If you fail to do this you are making a factual error and your score for task achievement will be lowered.

Note about the following task
The report is produced in 2010 so we can establish that all data before this point has actually occurred and everything after this date is a projection. 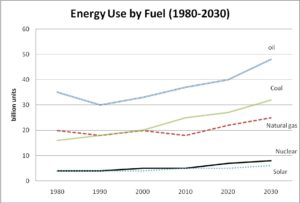 Model answer
Given is a line graph, which displays energy consumption in Australia from 1980 to 2030; the energy is divided into different categories according to fuel sources. Overall, it can be seen that there is an upward trend for all types of energy except during the period from 1980 to 2010, and this trend is predicted to continue up to and including 2030.

In 1980, 35 billion units of oil were used to generate energy. Fluctuations in the first 15 years notwithstanding, the units of consumption experienced a steady growth from 1995 onwards, and projections show the usage will hit about 48 billion by 2030. Even though coal starts the graph much lower at 16 billion units and natural gas at 20 billion units, they are both expected to climb to end at 32 billion and 25 billion units, respectively, with the usage of coal now ahead by approximately 7 billion units.

Standing at 4 billion units in 1980, nuclear and solar energy underwent a marginal increase in their consumption units, and are expected to reach 8 billion and 6 billion units, respectively, in 2030, according to estimates.
[189 words]

This is taken from my Book for IELTS Task 1 Academic