This blog teaches you how to plan and write an IELTS academic test report for part 1 of the IELTS test. 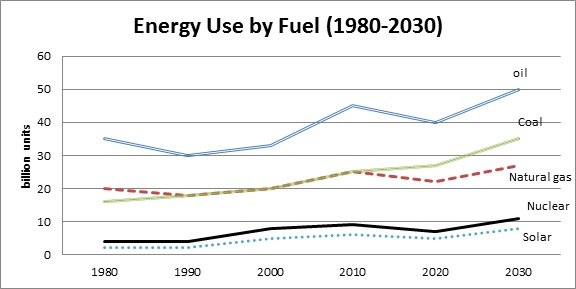 Note: about this task
The report is produced in 2010 so we can establish that all data before this point has actually occurred and everything after this date is a projection.

Model answer with the future predictions underlined
The line graph shows five different sources of energy consumption in Australia from 1980 to 2030.  Overall, it can be seen that there is an upward trend for all types of energy during the period from 1980 to 2010, and this trend is predicted to continue to 2030.

The main source of energy was oil. In 1980, approximately 35 billion units of oil were used, and the consumption experienced a steady growth to about 45 billion units by 2010. The usage is projected to continue to rise and hit 50 billion by 2030.

Steps to complete the model task

It’s about numbers, and note that the units are in billions. 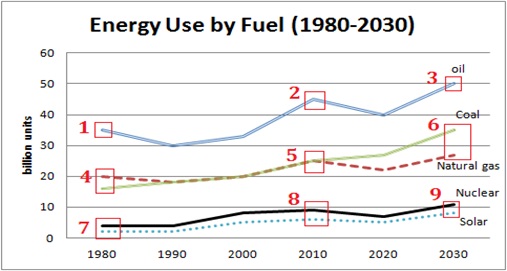 Overall, usage of all types of energy increased from 1980 to 2010, and it is predicted to continue increasing up to 2030.

Generally speaking it is easier to organise data by the fewest types of categories; so in this case, it makes sense to group data by energy type and not by time periods. The structure is as follows: